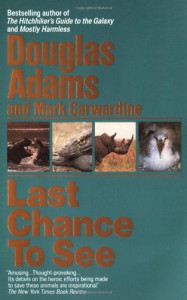 It's by Douglas Adams and if you look through my what-I-read lists, then this review is not going to present anything new about my love of Adams.

It's a bit more somber than his usual, but still contains some of his best descriptions and observations. His adoration (or otherwise) of animals truly makes you realize why this book almost utterly changed his life and pushed him passionately into the conservation work and talks he did in the few years before his death. I'm currently reading the more-or-less-sequel-that-is-not-directly-named-as-such which is written entirely by Mark Carwardine, which does give light to how much Carwardine influenced the book with his own wry humor, but what the sequel truly lacks are Adams' allegories and introspection pieces, such as him imagining a Yangtzee River Dolphin's world as being in an absurdly loud and dark discotheque. Or marking his scent nervously around China with deodorant bottles he purchased in an attempt to try something new.

I won't go on, but it's definitely worth a read.
Tweet